What!? There’s no such thing! You can’t have tourtiere without minced meat. YES YOU CAN! I made it purely by accident, as with most amazing things, and it stands up to taste-testing by meat-eaters.

Thing is, not sure I’ll ever be able to accurately recreate it as it included left overs that others had cooked.  I’ll tell you what I used, and what I think they used – and then  you can experiment and adjust to taste, and let us know what you did in the comments.

Blame it on Phyllo

It all started with a package of frozen phyllo pastry. I buy one or two a year. Always one at Christmas.  Never know what’ll go in it, just love the stuff and no matter what, it pretty well always tastes good!

Here’s what went in this year:

Turn up the heat a bit, and sauté all together until the onions are cooked, and the mushrooms and turnips are hot enough to continue cooking at a lower temperature, then turn it down to medium-low, cover, and let it simmer till the turnips are cooked. Don’t fret! It won’t burn. The turnips release LOTS OF WATER as they cook.

Hmmm, what else is hanging around that can give it a bit more flavor?  I poke around in the fridge and pull out a plastic container with about 3/4-1 cup, loosely packed salad, left over from a fundraiser for the Kalmo Refugee Support Group.  I’d been fasting that evening, so hadn’t eaten anything at the event.  But the food looked and smelled so good, so made a donation and brought some home!

The salad was a pretty straight-forward mix of finely chopped raw veg with a very few chickpeas.  No spices, and no dressing (that had been optional). The pieces of veg diced no larger than a chickpea!

I stirred it in, tasted it and decided it needed more spices.  But wait a minute…I was going to cook some rice…How about just use that already-cooked rice from the fundraiser? Toss it in now, let it simmer awhile, then think about more spices…

Changin’ it up with Somali Rice!

I had planned to cook some sticky, short-grain, brown rice to mix with the mushrooms and turnip, then make a vegetarian phyllo roll.  The rice from the event was long grain basmati.  There were no bits of veggie in it – just a very few raisins and even fewer bits of onion – and an absolutely, uniquely spiced flavor!  I’d never tasted anything like it ANYWHERE!

It was also unusually sticky for long-grain basmati rice.  It had probably been cooked with very little water, in the Spanish paella style.   I found a Somali rice recipe.  It calls for pre-soaking the rice, then adding the water and rice to spices cooked in olive oil or ghee. Water released from the turnips during cooking makes it really juicy, so you could possibly add uncooked rice, with 1/4-1/2 the usual water.  Go ahead, experiment!

Here’s the spices from that recipe for 2 cups of uncooked rice.  Remember tho, I only used a cup of densely packed cooked rice, so you’ll need to adjust quantities according to how much rice you cook!

That simmered for about an hour, then I let it stand overnight. The next morning a taste test said: Wow, this would make amazing tourtiere or sausage rolls.

This pie is built from sausage rolls! You need to make sausage rolls long enough so they will meet in the centre, when placed like spokes in your pie dish, then shorter ones to fill in the gaps! 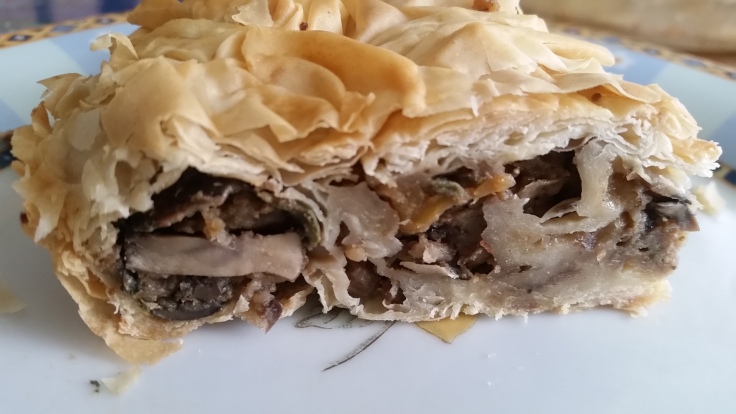 Cut your phyllo the right width to make your sausage rolls the right length.   I actually tore my sheets in half, then folded each half in half, laid my formed filling on it, laid a small strip of swiss gruyere cheese along the top of the filling, and rolled it up, finishing with the cheese side on top.  I made eight long sausage rolls, and eight shorter ones. 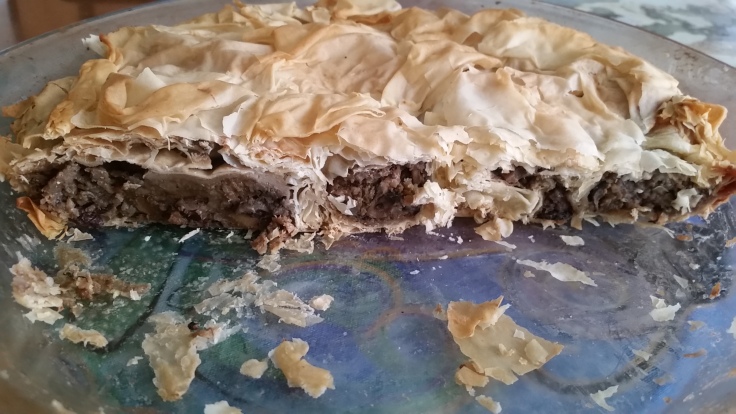 Bake at 400F until pastry is nicely browned. About 30-40 minutes. Serve warm with your favorite seasonal condiments!