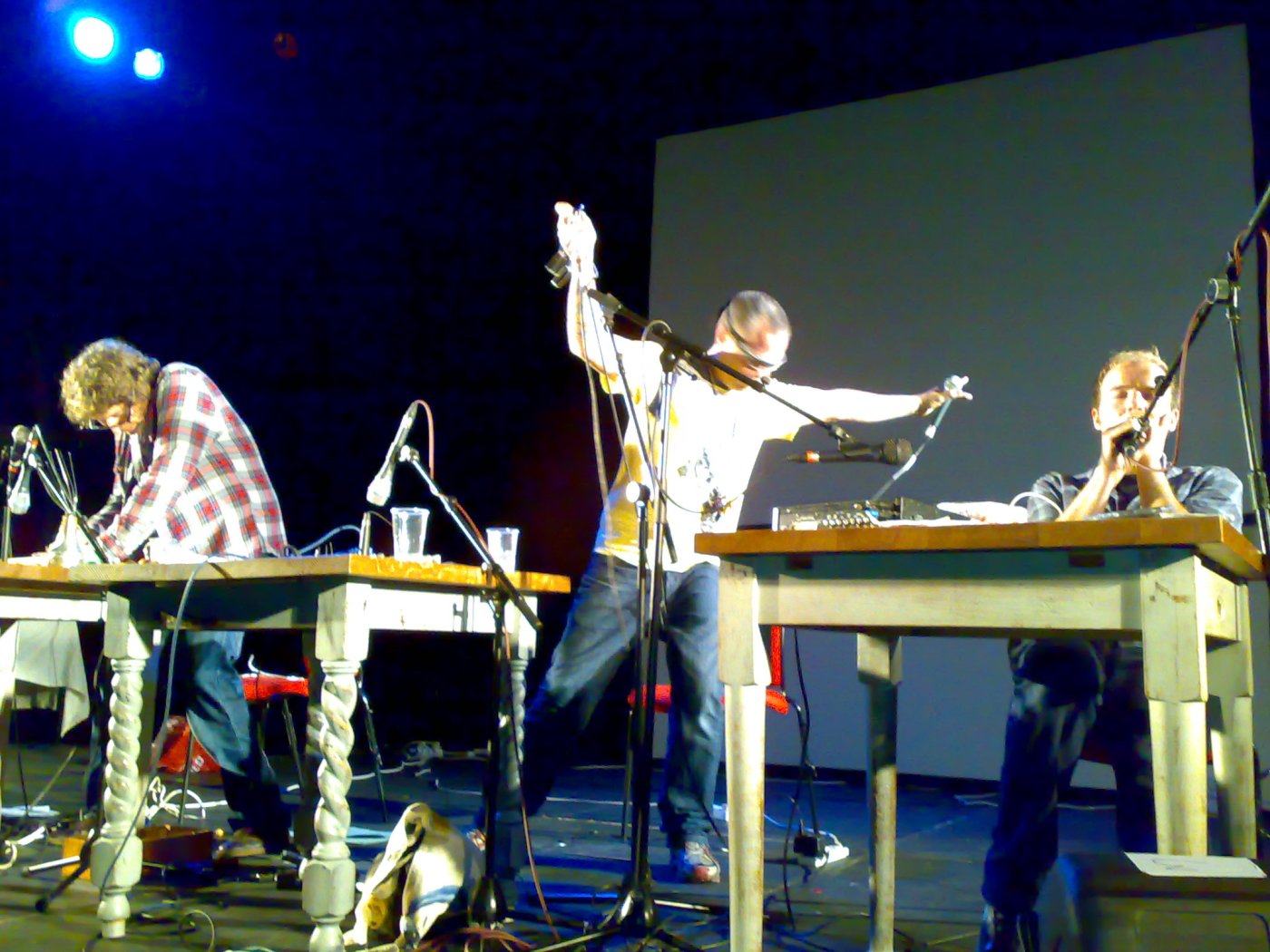 or is it that it takes a day or two to absorb and respond?

Met Dylan Nyoukis and Karen Constance, festival organizers, outside the venue when I arrived last night.  Dylan expressed his personal disappointment with the low numbers of women presenting.  Told me he doesn’t want to put on a sausage festival.  I prefer to call it a dick head fest, or maybe a dicky-doo?

We had bits of conversation throughout the evening, and he really was sincere in his concern for lack of female artists presenting and told me about some of the women who were performing, as well as women he has recently released on his label Chocolate Monk. I have no argument with Dylan, it’s Dan Spicer I find abrasive.  He writes for The Wire and does the publication a disservice with his behavior. I don’t dispute his knowledge, or his ability to write, but it doesn’t give him a license to publicly bully women he disagrees with.

When Dan asked me to name women who could have been included in the program, and I suggested myself, he said “I don’t dig* your stuff.”

“Oh, and you choose the artists, do you?” He replied by telling me that he has influence.

Clearly his taste his heavily influenced by his difficulty with women like me, because when I suggested violinist Annie (Kerr) who plays regularly at Safehouse Experimental Music Collective improvisation sessions, he told me he doesn’t know her.  Yet Dan has been in the audience (rarely have I seen him in attendance) at Safehouse when Annie was playing.  Is he not able to see or hear her because she is a woman?  and not a young woman, dressed in attention-getting garb, but rather a mature woman, dressed in slacks and sweaters, like the clothes many male musicians wear?

When we were chatting outside the pub at the after party, Dylan brought up my concern for gender equality, and told me of his experience as a man, disliking the way many of his male schoolmates spoke about women.  So I really do want to make it clear that this post is in no way intended to slur Dylan and the Color Out of Space Festival.  Rather, it’s to point out how easily women artists are sidelined by a culture that gives men like Dan Spicer a voice of relative influence.  I am not saying there Dan’s opinion shouldn’t be heard, rather it needs to be balanced with the writing of a strong female opinion.  And a female of equal maturity. I mention equal maturity because so often we get older men with a voice in the media, while their female colleagues are much younger women.  It sends the message that a mature woman’s opinion is invalid.

If you look at the list of contributors to December 2011 issue of The Wire, only one is female.  You can argue that women don’t have the knowledge or experience in modern music to write about it, and if that’s the case, why is it?  Modern Music does not need to be dictated to and shaped by masculine aesthetics, and as long as they are the ones with the dominant public voice, they will shape the wider opinion.

It’s why we need gender balance in the media and on arts and culture steering committees.

Asked for My Critical Opinion

At the after party, in the context of casual conversation, someone asked for my critical opinion.  Basically I said I think Noise as a music genre is stuck.  It needs more space.  I didn’t see or hear anything new or startlingly innovative last evening.  Sorry.  Nothing surprised me.  Yes, it’s clever to drag a coat rack on stage and amplify the sound of the curtain hangers sliding along the rail, but it needs more.  Perhaps if the hangers were slid to create a rhythm or repetitive beat.

I also said, Noise musicians need to learn to create space in their live performances, so they can hear and listen to one another playing and in that way create a dialogue.  A lot of what I’ve heard this weekend has been a wall of noise.  Yeah, Micro Penis used electric razors and drills, but I couldn’t discern the sounds in the context of what was happening.  They could use that gear to create a dialogue with one another. It isn’t about making the loudest sounds.  It’s about dialogue – with the musicians you are performing with, as well as giving space for the audience to get inside your sounds.

And oh yeah, experimental modern music is more than Noise!

Maybe Dan Spicer doesn’t dig my stuff but there were plenty in last night’s audience who enjoyed my improvised contribution. Excuse my North American blatant self promotion!

Another highlight from last evening was meeting John Schoen, from Rochester, N.Y., who goes under the name Licker.  John’s solo performance was one of the highlights of Friday evening.  He opened his performance, moving through the audience playing his saxophone.  Both his style of playing and his movement imbued the audience with energy.  Then he settled in a clearing in the audience and swapped his sax for a microphone and vocalized – his vocals matching the sounds he had created on his sax!  Quite an accomplishment, that.

I met John after we joined our voices to PC Fencott’s sound performance – another artistic highlight of the evening (sorry, no pics!)  It got John and I  talking – someone I wanted to meet after seeing his performance – and it also brought lots of people to chat to me throughout the evening and at the after party.  The audience seemed to appreciate my contribution.  Stroke, stroke! We all need strokes!

I met NYC-based, Japanese field-recording archivist Aki Onda – another highlight of Friday evening. Aki has how many? field recordings he’s collected over the past 20 years on Walkman cassette tapes. He told me he buys his cassette recorders – of which he has 100’s – on Ebay. In Friday’s performance he used the mechanical tweeting of the birds (on the floor to his left) to introduce field recordings of birds singing.

At the after party I met lots of the women who will perform this evening. This is Evie from Brussels, perched a top a stack of chairs outside the pub. Not a great pic, but shows the wackieness of the night!

*dig?  Do we still use that word?  Is Spicer trying to be cool by reintroducing a 60’s word?  Or is it a reflection of his personal taste in experimental music being stuck in a long-gone era that we – who make the music – have moved away from.  For example, listen to American roboticist David Atlas’s tracks. Here’s a sample. Go listen to some more on soundcloud by clicking on the waveform.

2 thoughts on “Color Out of Space Day 2”