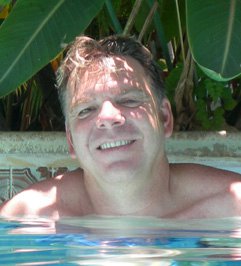 My but the Internet is a wonderful and vast creation. Here we have another dimension, where all things are possible. What you get out of the Internet depends largely on what you do with it, where you visit, how you interact.

I’ve encountered many amazing people on the web, maintained acquaintances that have lasted years even though we’ve never met. Met people who I’ve later met face-to-face, reconnected with people I thought I’d never see again (and some I’d rather never see again!)

One person I’ve met here is Gay Guru Michael Brewer. I first met him through the YouTube Video that appears in this post. Then one day – how many years later? – we linked up on Facebook. Before that, he was just another YouTube Guru who had touched my life. Since then, I’ve shared private chats with him on Facebook, bantered in wall posts, even received calendars in the post at Christmas time: Michael’s photography – pictures of his garden in Switzerland and European adventures.

Recently I was reminded of the Ho’oponopono Prayer’s power and went looking for this video and couldn’t find it. Posted a message on Michael’s Facebook wall and within seconds had a link. It’s a fun little reminder that we can let go of accumulated baggage and move forward.

If you don’t want to do the long form of the prayer, you can do the short version:

I love you
I’m sorry
Please forgive me
Thank you.

It’s a healing prayer you can use whenever you’re stressed or angry, anxious or hurt. Simply hold in your mind’s eye an image of the person who has upset you and say the prayer. Repeat until your anger melts.

How come you are asking the person who has upset you to forgive you, and not the other way round?

In very basic layman’s terms, the idea is that something in you has triggered something in them, that in turn has caused the situation that has created your emotional/mental state. By asking them for forgiveness, it melts. Next time you start nursing a grudge, or feeling anxious about something, try it.

You can even use it on yourself! After all, we’re often our own worst enemy, creating all sorts of mental dramas about our interactions with people. Ask yourself for forgiveness. You never know, it might just change your life!

I wonder what would happen if we used it to gang up on the bankers?

2 thoughts on “Meaningless Virtual Encounters or Life in the Spirtual Universe?”